I have been making this for about a year. I was rather unfamiliar with quinoa a year ago when I started making this. Now I've made it multiple times, and it's always delicious. This recipe makes a great, nutritious work lunch, and is very adaptable, as you can throw in whatever assortment of leftovers you have lying about the place- it's particularly fabulous with some leftover chunks of roast pumpkin.

Quinoa is a Bolivian seed that has taken the western world by storm. So much so that it is causing problems in Bolivia. It is even being adopted by New York Jews as a controversial new kosher food for passover.

I always feel conflicted about food miles when using quinoa. All the brands I've ever found have been grown in Bolivia. I've never found any grown in Australia, maybe that will happen sometime soon. When I made this today I was able to use a glorious cauliflower grown locally in Canowindra. Hopefully this can help combat the Bolivian effect.

Preheat the overn to 170C

Spread the cauliflower florets evenly in a roasting pan, do not crowd them. Drizzle with just enough olive oil to coat them lightly, and season well with salt and pepper. Roast the cauliflower for about 20 minutes, shaking the pan from time to time to ensure it cooks evenly, until it starts to caramelise and become tender.

Meanwhile rinse the quinoa and place it in a small saucepan with the stock (if using homemade stock add a pinch of salt). Bring the stock to the boil then reduce the heat and simmer, uncovered, gently for about 25-30 minutes until the quinoa is tender and the liquid has evaporated.

Place the quinoa in a bowl with the cauliflower, scraping the roasting pan to get all the crisp bits and any remaining oil. Add the chives, crumble in the goats cheese. Season to taste. Mix gently to combine and evenly distribute the cheese.

Serve the quinoa as a light meal or with braised lamb shanks. 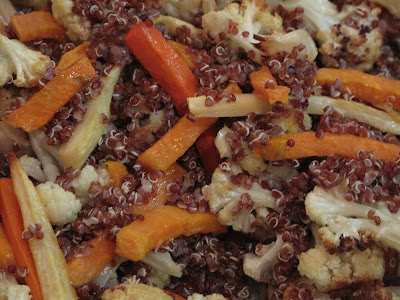 Notes
My oven is always slow. It takes much longer than 20 minutes in my oven to roast the cauliflower.

While it is better if you add some cheese to it, sometimes I've run out and it's still delicious. It's fine with or without chives too.

My 10 year old son is even happy eating this! For some reason cauliflower is his favourite vegetable and he even like quinoa- although he prefers to call it worms.


I often throw in some other veggies when roasting the cauliflower- such as parsnip, carrot and pumpkin. This then makes enough for a whole week of nutritious tasty low GI work lunches. 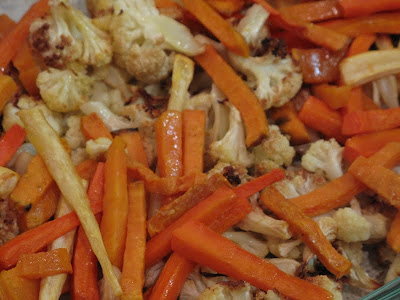