Durian is low GI- but who really cares?

After all, durian isn't edible anyway.

That makes it no GI really. On formal testing durian has a low GI rating of 49.

Some misguided folks apparently refer to durian as the "king of fruits".

I was very excited to try this on my trip to Singapore last year. I had heard so much about it. But whatever you've heard can never prepare you for the smell of fresh durian.

Once you've smelt it you completely understand to your core why it's banned on trains and buses. 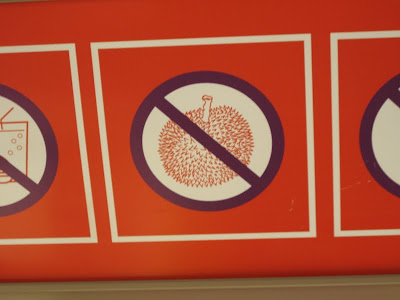 So how does it smell? It smells most like burnt vomit. Hard to get away from that fact. But it does. You can tell that there is a fruit stall around the corner, as you can smell that unmistakeable stench from that far. 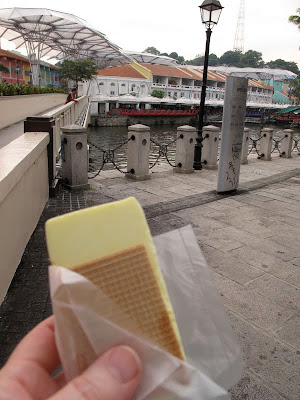 But it's not. I tried to like it, but I just couldn't do it. I only managed to nibble the icecream down to the start of the wafer. Couldn't do it any more. And I paid for it for hours later. Each time  you breathe out you can smell burnt vomit all over again.

Buying the icecream was fascinating in itself though. I bought it from a cart seller. The lady got a block of your desired flavour out of her freezer, and wielding a massive knife she cut a slice with great precision.

Durian, try this low GI treat at your own peril.

This post is linked to Weekend Cooking, a fabulous weekly meme at Beth Fish Reads.
Posted by Louise at 21:04