I've been wanting to make this soup for a few years now. A combination of a snowy weekend (in Spring!) and my low GI leanings finally spurred me on. I'd wondered about it before- lots of vegies, and using skim milk powder for the Creamy part is unusual and something I hadn't used before. My version is  based on a recipe from diabetes 2 by Jody Vassallo, part of the Health for Life series.

Barley has one of the lowest GI values of any carbohydrate food (25), and it actually lowers the GI of any meal. It's not a food that I have eaten all that frequently, but I can sense that it may be in my future. I have used it in soups a few times, but not regularly, and have never tried it as a side dish. There is a recipe for Pesto Barley in the same book that might be tasty.
Creamy Vegetable and Barley Soup

1 Put the barley into a large pan, cover with water and cook over medium heat for 40 minutes or until the barley is soft. Add extra water during cooking if the barley is drying out. Drain well.

2 Heat the canola oil in a large pan, add the eschallots, carrot and celery. Cover and sweat over low heat for 10 minutes until soft.

3 Add the parsnip, pumpkin, thyme and stock and bring to the boil. Season to taste. Reduce the heat and simmer for 15 minutes. Add zucchini. Cook for a further 15 minutes until vegetables are soft. 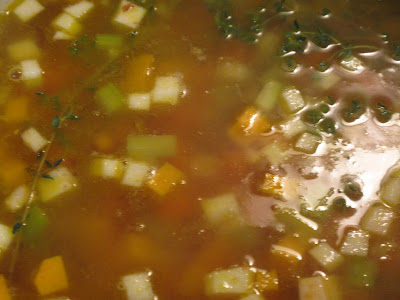 4 Add the peas, corn, and barley and simmer for 5 minutes or until the vegetables are cooked. Add skim milk powder and parsley.


Notes
I made quite a few modifications to the recipe, with ingredients and technique.
The recipe called for leek but as there were no leeks available when I made this,  I substituted 4 eschallots. For some reason onion terminology is very confusing in different countries, this is what an Australian means by eschallot or french shallot. 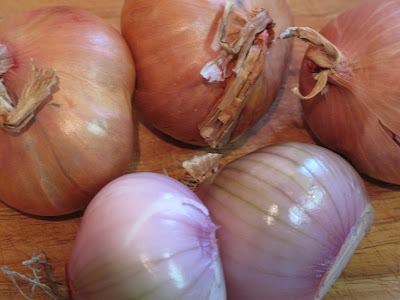 Even though the zucchini were thickly sliced, I didn't want to cook them for half an hour so I added them 15 minutes in.
I'm always suspicious of recipes with no seasoning, and don't think they taste all that good, so I added salt, pepper and a couple of large sprigs of thyme (just because I'd bought some for something else so had it on hand)
The original recipe added the peas, corn and milk powder at the same time. The milk powder bubbled up and looked lumpy. I would add it at the end, after the peas and corn had cooked.
It was quite nice, I'd be happy to make it again.
Cross-posted to soupsoupglorioussoup
Posted by Louise at 22:57

Email ThisBlogThis!Share to TwitterShare to FacebookShare to Pinterest
Labels: soup