The Good, The Bad, and The Ugly

Little did I know when I started eating low GI a few months ago that I would end up with Gluten Free, Sugarless Chocolate in my paws. It wasn't an expected turning for me. This is not the sort of food product that I would have even noticed a few short months ago. And possibly I know why.
I'm always rather concerned when my food contains warnings. Particularly if they need to warn that Excess Consumption may have a Laxative Effect. Great. How much is Excess? Will one block cause me to run to the loo? One line? Half a block? Eight kilos of it? How much? This warning is because the first ingredient I now notice (more than cocoa butter which comes second in the Lemon White Chocolate) is maltitol. Maltitol is an artificial sweetener, which is poorly absorbed (thus the diarrhoea warnings), and so even though it has a moderate GI (69 in my book, but I see different and lower values on the web), it has little effect on blood sugar levels. Ah, wiki tells me that the United States classes maltitol in the Generally Recognised as Safe club, and that the potential laxative effect may occur if more than 100 gm/day is consumed. Whew, I've never got near that.
The thing that most concerns me about maltitol without googling it for hours is that it is made from corn. I haven't read all of Michael Pollan's work, but I have read part of the corn section in The Omnivore's Dilemma. He talks about the dangers of monocultures in agriculture, and how this forces us into heavier reliance on fossil fuels and chemicals to negate natural pests. He also tells us that the carbon in corn is naturally different so that scientists can test meals to see how much of the carbon came from corn (I can't remember the intricacies of how), and if you pulverise a hamburger from a fast food "restaurant" then I think it was something like 70% of the carbon came from corn! Although this article on the Scientific American site, gives a figure of up to 93%! All rather frightening.
This first low GI chocolate experience one wasn't too bad, I think. I don't remember it being awful at any stretch (I bought this a month or two ago, near the start of the blog, and I didn't realise that I would use it here). I don't remember it very well actually, I may have to try it again to be sure. 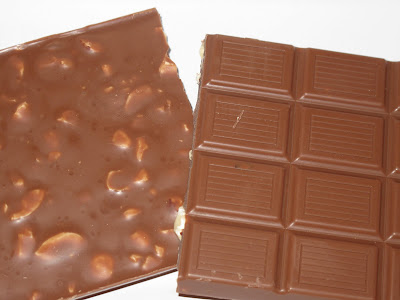 I had high hopes for this next one. I'm not sure why. Perhaps I do have an underlying optimistic streak after all? The girl in the chemist (yes, that is where this sort of treat lurks, in the chemist, that should have been warning) gushed about how nice this particular chocolate was when I bought it, she said the staff had all tried it and thought it was really nice. 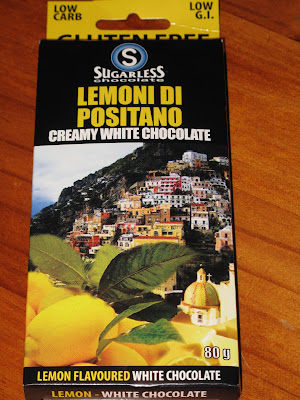 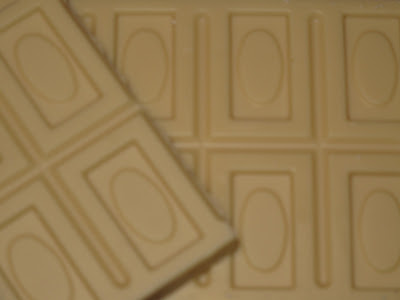 Sadly, it wasn't Really Nice. In fact it wasn't even nice. It was Awful. The artificial lemon smell was really quite overpowering and smelt like they may actually manufacture this in the Shower Power factory. That fake lemon smell is ok, if you want to clean the bathroom, but if you want to eat a yummy chocolate, well, it's not what you're looking for. Why is it only when I get it home and open the packet, I see the Artificial Vanilla and Lemon Flavours padding out the ingredient list?
The chocolate itself I found soapy with a grainy texture. It was Awful.
I've just noticed a warning on the back of the pack, that it isn't recommended for kids under 3 years of age. You know, if they can't eat it, then I don't want to either. Although that doesn't apply to everything of course. They can't eat whole nuts because they might choke on them, but at least they aren't considered toxic.
Oh great and I just noticed it was expired (08 2010). Urgh. I can't imagine that explains my experience, but it's still annoying. And should have been another clue.
I surely must be an optimist, as on a recent trip to Bathurst, I was caught short without adequate supplies of antihistamines and panadol, so as I fronted up to the counter at the chemist (oh dear God I'm in there again) I noticed this little packet. Now I'm not a great fan of Darrel Lea chocolate as a rule. They do make a Chocolate Caramel Snow Bar that I liked as a youngster, but I generally don't buy any of their stuff from year to year. So, I'm not quite sure why I bought it, but I did. 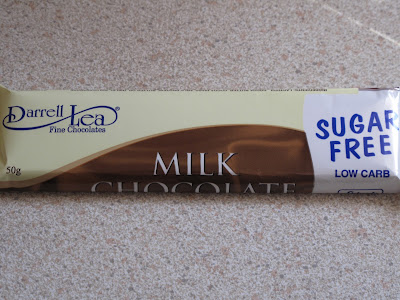 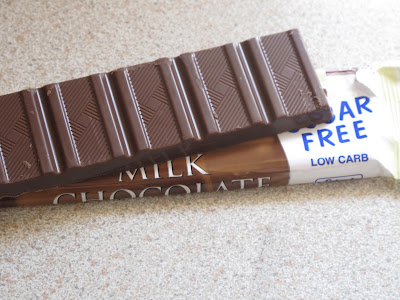 To be fair, it had quite a reasonable snap when I broke a piece off. It looked ok. But it wasn't good in the mouth. It almost tasted like compound chocolate with a nasty edge to it, so much so that it was a bit of a struggle to finish even this modest 50gm bar. But finish it I did, although it did take a couple of days.
Posted by Louise at 23:28