Oops I did it again. I was half way through making this before I realised that it was Accidentally Vegan (well it would be if you use vegetable stock, which I did and leave out the honey I guess). It could be gluten free, if you used the tamari (I think that's GF, although I'm not a GF expert).

It's great where inspiration can strike. Thumbing through this weeks Good Living (the Tuesday Food and Wine supplement in the Sydney Morning Herald) my eyes lit up at the kids recipe- a spinoff from the Junior Masterchef phenomenon no doubt. Japanese Quinoa Salad.

I had some fabulous quinoa in the pantry and thought it would look fantastic in this salad. 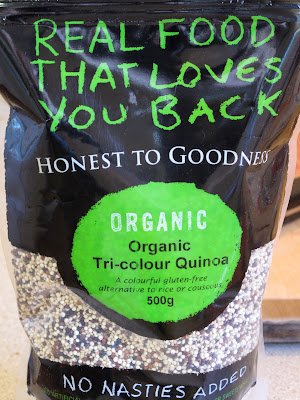 Actually I think it looks prettier uncooked and in the packet, but it's still a nice effect. 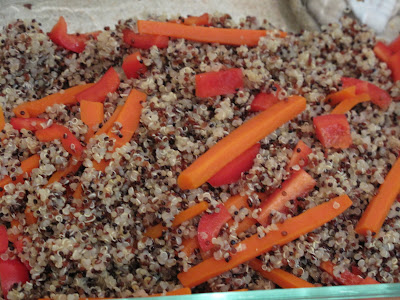 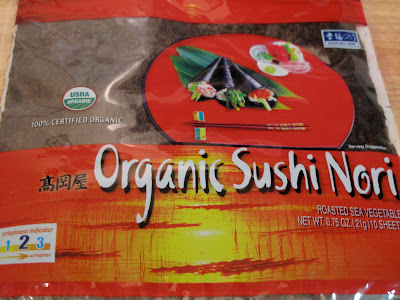 Wash the quinoa by rinsing it in cold water and strain well. Put washed quinoa and stock into a saucepan over medium heat. Bring to the boil, then lower heat, cook over low to medium heat for 25 minutes, or until soft, and water absorbed. Set aside.

To make the dressing, mix all ingredients and stir lightly.

Dress the salad and toss lightly, sprinkle with nori and extra sesame seeds. 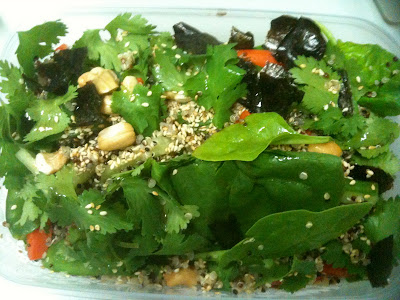 OMG I can't believe how delicious this salad is. My new favourite lunch, and I haven't even had a chance to blog my old favourite lunch yet. Interestingly, both involve quinoa. Although not all quinoa experiments are as successful as I found out today when I toyed with a sweet quinoa dish.

Notes
Suggested as suitable for 8-12 year olds to make, but is easy enough for adults to make too.

I can't stand raw carrot, and think it's actually inedible, and since I've already eaten some once this year, I decided to modify this recipe by cooking the carrots, and greening it up, with some snow peas and spinach. I was planning to add asparagus (just because I love it, and the season will end soon) but the stuff available yesterday was about as thick as my forearm, and didn't look appealing.

I just realised I forgot the ginger from the dressing! Oops. Still delicious. I used the honey, I may try it without, I was planning to, but it really is delicious as is, did I mention that? So now I don't really want to mess with perfection.

Because this makes a reasonable amount of salad, and since I'm using it for work lunches it will last me the majority of the week, so I only made up the quinoa, carrot and capsicum. Then each day I add fresh greens to it in my lunch box. And I carry little containers with the seeds/nuts/nori/dressing to keep them fresh and crunchy, to keep the texture nice. No point in having soggy salad just because you're at work, there has to be one highlight to the day. 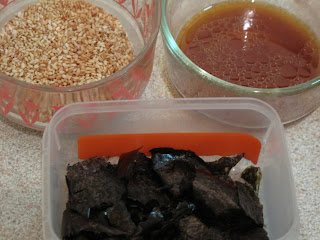 I'm planning on topping it with the asian flavoured tofu that I have lurking in the fridge (no-one else in the house is in danger of touching it!), but didn't get around to that today. I'm sure it would work with a tin of soy beans mixed through as well.
Posted by Louise at 23:28