These have to be one of the biggest surprises of my "low GI journey" thus far. I would never have predicted that I would like broad beans, or indeed that I would try- and like roasted broadbeans. I remember being vaguely apprehensive about even buying them, but nothing ventured, nothing gained. They appear to be more aimed at modern middle class mums looking to put something other than chips or muesli bars into their youngsters lunch box for school- billed as "lunch box Fava-rites". Oh dear. We get it.
But 40 somethings on a low GI path can enjoy them too. They are actually a tasty snack as claimed. I've never been much of a one for a packet of crisps. Indeed, I'd buy something like that maybe once every five to ten years, but these are good for those moments when you need some crunch and salt. They even make an easy snack to slip into your bag to take to the movies, and to share with your unsuspecting, but immediately suspicious friend- who turned out to like them too. 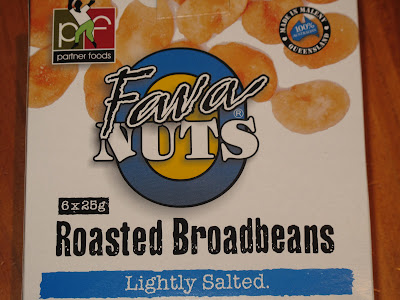 And they do seem moderately healthy. They are low GI. A good source of protein. The fat is probably a bit high, but given they're packaged in handy portion controlled 25 gram packets- that only gives you a modest 6.1 grams of fat. And I like that the ingredients are all those with names, not numbers. 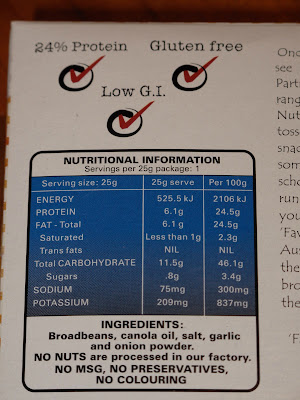 Even better, we're doing a good thing for the environment by eating them, as broad beans are one of the "green manure" crops used to fix nitrogen and replenish the soil after other crops have been grown. 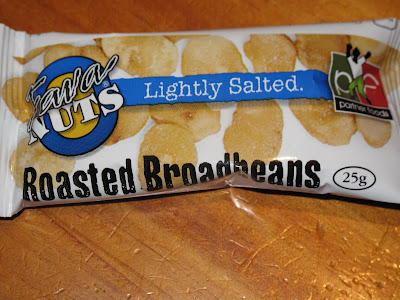 And we get a tasty snack out of the deal too: 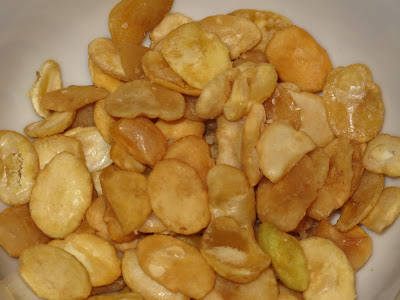 Even the dog likes them:
Posted by Louise at 08:29