I always get excited when I see a new cereal proudly proclaiming it's low GI status. I'm much more of a cereal for breakfast gal than a toast for gal breakfast. I'm often quite happy to eat the one cereal for years, but I will certainly try a new one (there is always the hope for the next best thing).

So I was quite excited to spy the new Be Natural range lurking on the supermarket shelves. Recycled packaging, a promise to support Landcare. All very good and responsible corporate citizenship designed to appeal to people like me. 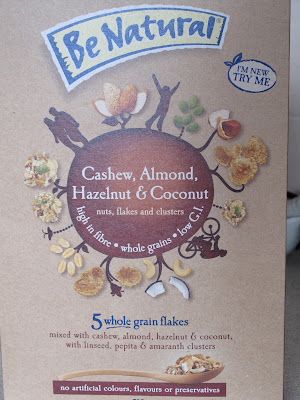 But what of the cereal itself? Flakes made from five whole grains (wheat, oats, triticale, barley and rye,  indeed whole grain cereals make up 49% of the ingredients), mixed with  cashew, almond, hazelnut, coconut, and clusters made from linseed, pepita (pumpkin seed), and amaranth (a newish food to me, a grain touted for it's high protein content). It all sounds Frightfully Good For You, but is it?

It is Low GI. This is proudly proclaimed on the front of the pack, but I can't find the actual GI rating amongst the maze of fine print all over the sides of the pack. It is hidden on the website. 54. So just sneaking in as Low GI, but still low GI all the same. The ingredients are all recognisable food substances. There are no numbers. Which is fabulous. 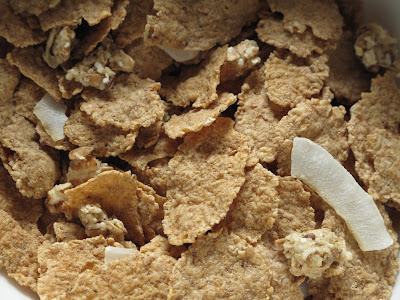 But how does it taste? Well, it's ok. I'm not the greatest fan of flake type cereals, corn flakes for instance. And the flakes here a bit cardboardy. The clusters are quite tasty by themselves, but there's  not quite enough of them to drown out the cardboard quality coming from the flakes.

It is quite edible when smothered with blueberry and banana- but then what isn't? 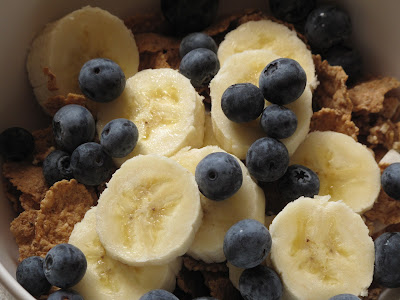 I will probably try the apple version of this cereal at some stage, and they have a low GI mixed grain porridge that I will try when the weather turns cooler- which can't be too far away, I'm already noticing some red and yellow highlights to the trees.
Posted by Louise at 13:16