I've been having a bit of a hummus revival the past few weeks! I've been soaking and cooking chickpeas for the first time in at least 20 years, and greatly enjoying it. I've learnt that cooking a whole packet of chickpeas is really a bit much when you just want enough for a 400gm tin. Half a pack is enough for that, and you still have some left overs for adding to salads, without having to eat chickpeas twice a day all week.

I've long wanted to try flavoured hummus but never really got around to it. I've made this recipe twice. Once using lemon juice and tahini, the second time using lime juice and peanut butter. Both were good. But the lime version was greener, punchier, much more tasty, and absolutely delicious. And will keep the scurvy at bay.... 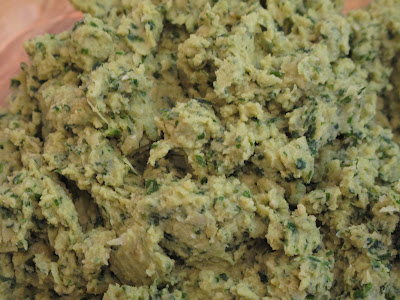 With some pita crisps or crudites it makes excellent nibblies for friends or a great work lunch.

Coriander to Australians is what Americans would call cilantro. I absolutely love coriander- can't get enough of it. I pile it thickly in a layer on sandwiches, and particularly love it in combination with avocado and sweet chilli sauce. I've never understood why some people seem to dislike it- I always thought that they were just strange! But this recent article in the New York Times helps explain why some poor people just can't eat it! I must say I would almost find that to be a disability.


Process the coriander and garlic until finely chopped. 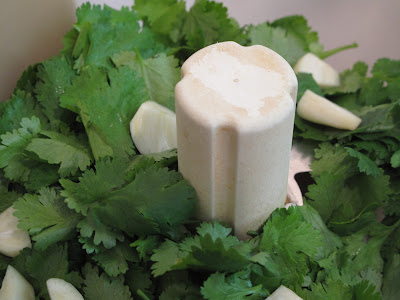 Notes
Adapted from a recipe in the Australian Women's Weekly November 2010. The recipe originally had lemon juice and tahini, but I had a heap of limes in the vegie crisper and thought it would be interesting to try that, particularly in light of my recent Peanut Butter Hummus Triumph. The lemon/ tahini version was nice, but didn't quite sing as much as the lime/peanut butter version. The lime version was also moister than the lemon one, not sure why. With the lemon one I had to add a bit more oil and lemon juice, and still got a relatively dry consistency. This one was perfect as is.

The original recipe had 2 tsp of sweet chilli sauce, which wasn't quite enough. I tried 3 tsp the second time I made it. Still not quite there. I'm nearly out of sweet chilli sauce at the moment. But after I replenish stocks, next time I'll try a tablespoon, to give it a bit more zing.

I will only eat one brand of sweet chilli sauce, which sadly isn't available in my patch of small town Australia. I'm looking forward to stocking up on an upcoming trip to Sydney. 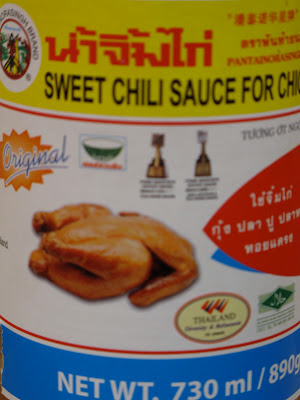