Rhubarb is one of those Love It Or Hate It foods. Thankfully I'm happily in the Love It camp. And it's low GI. Well rhubarb itself is actually so low in carbohydrate as to be no GI! Although I do love it, I too must add some sweeteners to make it totally delicious.

Rhubarb is traditionally flavoured with orange juice, but for some reason I really don't like cooked orange all that much (there are some exceptions), and I really don't like the orange/rhubarb combo. So for many years I've experimented with different flavourings and sweeteners for my rhubarb. I prefer to use some maple syrup (how can that actually be low GI, but so glad it is!) and in the past have used concentrated apple juice (I'm not sure of the GI here, and since my bottle was long expired, I decided to avoid it when I made this the other day). You can also throw in some grated ginger, or do a mixture of fruits such as apple or pear (I haven't tried that yet, but it should work, indeed I've just thought of it now and want to try it).

It's so easy you don't really need a recipe, it's more just a method. If your rhubarb stems are different thicknesses then cut the thinner ones in longer pieces, and the thicker stems in shorter pieces so that they all cook in about the same time. 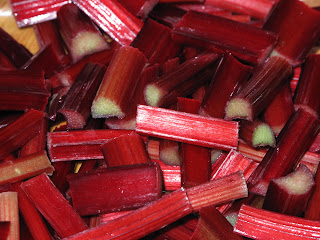 Rhubarb can be cooked on the stove or in the microwave, but I much prefer to bake it. Rhubarb holds its shape and colour much better if it's baked rather than stewed on the stove top, and I prefer to see the wonderful pieces of rhubarb rather than a mush of red strings. 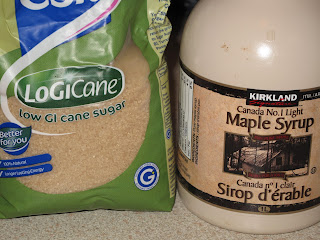 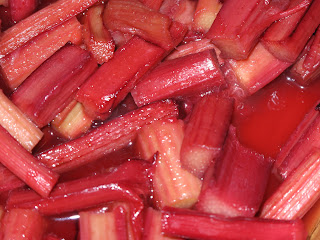 There are lots of ways to enjoy this. I like it on my morning cereal for breakfast- by itself or with other fruits if I have them, it goes nicely with berries or banana, and of course tastes fantastic with cinnamon sprinkled on, 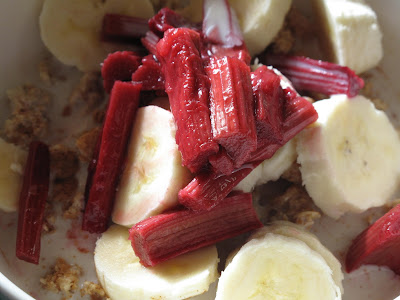 or with yoghurt (plain, vanilla, strawberry) for dessert or a snack. 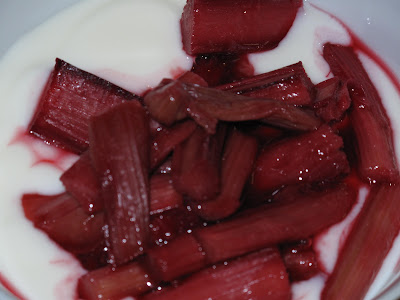