Inspiration can strike any time or any place it seems- even in the Staff Dining Rooms of the world. Not for the food that exists there obviously, it really is uninspired and pedestrian, and sometimes downright inedible. But occasionally you may find an old Women's Weekly lying about, that has an attractive sounding recipe. Such as this one from November 2009. Truth be told, I'm sure that this edition would also be lurking about somewhere in the house too, but I found it in the Staff Dining Room. And today it became my Accidentally Vegan Lunch. Vegan isn't quite my thing. It's fine for those who want it of course, and fine for the occasional lunchtime dalliance. But I'm not vegan, and I'm not even vegetarian.

Butter beans are low GI (I used ready canned ones, which have a GI of 36, if I'd been more prepared and cooked them at home, then the GI is even lower!) 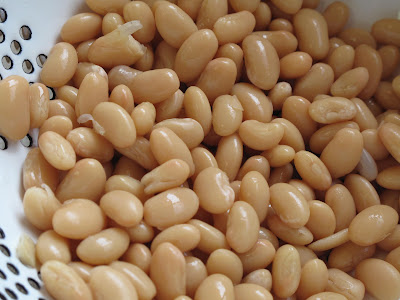 1. Process beans, almonds, lemon juice and garlic in a food processor until smooth

2. With motor running gradually add the olive oil until thick and creamy. Season

3. Transfer mixture to a saucepan. Stir over low heat until warm. Transfer to a serving dish, drizzle with oil and sprinkle with ras el hanout.

Notes
Of course I modified the recipe.
The original recipe called for a 400gm tin of cannellini beans, and I only had a 300gm tin of butter beans. So I used those, and did a 3/4 recipe.

I was distracted, and so added most of the oil, before realising I was supposed to blend the other stuff first (Note to self- read the recipe all the way through- hey I just noticed the warm it up in a saucepan bit- I didn't do that either, hmmmm I really need to make this again, and have a go at making the recipe, I will try warming the leftovers tomorrow), not that I think it mattered a whole lot. My texture was more rustic than thick and creamy. Still tasted fine.

The ras el hanout is my own addition. I have a magnificent tin of it that I got from Maha in Melbourne on my last visit. Just the smell of it is intoxicating. Which you need, just in case you accidentally make yourself a Vegan Lunch. You could of course use a myriad of other spices- sumac, za'atar for instance.

I hate raw carrot (nearly as much as celery), so I peeled them lightly to make them (marginally) more palatable. This was a bit too much of "eat what's good for you", and I still have at least half a bunch of baby carrots for tomorrow. Oh goody. I think I might have to blanch them too.

Ok, so the beans are cooked, and I blanched the asparagus.
Posted by Louise at 21:26