Necessity may be the mother of invention, but I think serendipity makes a pretty good step-mother. As I was chopping up another bunch of rhubarb to bake, I was putting away the rest of the shopping and as I picked up the punnet of blueberries, and had the What If thought. It wasn't a combination that I'd thought of before, or seen anywhere. But a quick google and I was reassured- people make rhubarb and blueberry jam and rhubarb and blueberry crumbles so it must be a thing worth pursuing, or at least trying.

So I chucked half a punnet of blueberries into my rhubarb, and it was fabulous. Blueberries aren't my favourite berry, but they are frightfully good for you. The book Low GI Eating Made Easy says that apart from strawberries (GI 40), most berries have so little carbohydrate it's difficult to test their GI. On GI news they rave over blueberries as a superfood and wild blueberries in particular, which they give a GI of 53. Which is a tad confusing it must be said.

My rhubarb blueberry combo was fantastic on some nice thick strawberry vanilla yoghurt. Once again baked with a bit of maple syrup and a sprinkling of maple sugar, which really enhances the maple flavour. 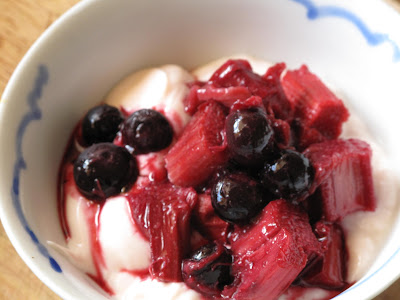