Don't you just love it when you're cleaning up the house one morning, getting rid of some old newspapers, you find a recipe you'd like to try, then you realise that you already have everything you need to make the recipe in the house, and you make it that night? How fantastic is that?

That happy circumstance occurred today, with this very recipe. It's a nice simple recipe, perfect for the hot Aussie summer that has finally arrived in full force. It's essential to spend as little time as possible in the kitchen, and not to need to cook anything very much at all. This recipe just needs a quick blanching for the beans and you're done. 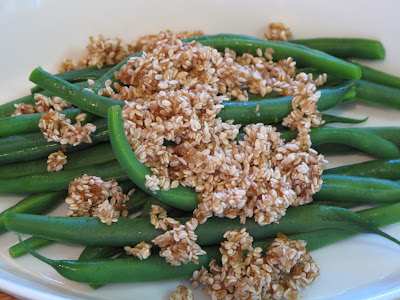 In a mortar and pestle, crush the sesame seeds, add sugar, mirin and soy sauce and mix to a paste. Toss the green beans in the dressing and serve.

Notes
The original recipe used caster sugar, but I substituted the lowGI sugar, both to lower the GI and also because I store old vanilla beans in my caster sugar, and I didn't want the vanilla flavour with this.

I made a quarter of the original recipe and it was plenty for two adults as part of a simple ham salad. 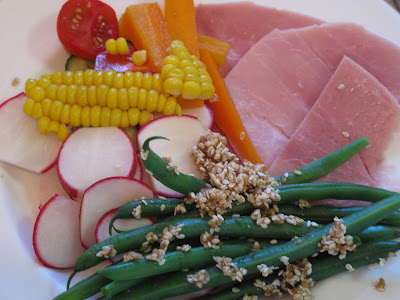