It seems that breakfast cereals are not healthy enough in and of themselves (and why do we let them get away with that??), and so there exists a wide range of products to boost the nutrition in what I should have thought would be a nutritious food. In my quest for better eating I've boldly gone into this Breakfast Boosting world. 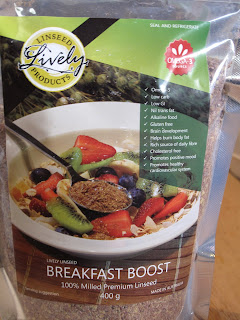 It's fair to say that I haven't eaten all that much linseed in my life. I went through a phase a few years ago of eating soy and linseed bread. I didn't mind it. In fact I got to prefer it (especially with nutella) to other breads. But linseeds aren't a food that features all that much in the typical Australian diet.
The linseed or flax plant has beautiful blue flowers, and must look glorious to see a field in bloom. The seed is said to have many health benefits. The front of my pack lists
-omega 3
-low carb
-low GI
-nil trans fat
-alkaline food
-gluten free
-brain development
-helps burn body fat
-rich source of daily fibre
-cholesterol free
-promotes positive mood
-promote healthy cardiovascular system
With more benefits on the back. I don't know whether all these claims are true, but even so, it can't be a bad thing for us to eat now, can it? I do like the concept of eating many, varied foods in a day- there have been many names for this- such as rainbow diet- which I think is a great concept, and easy to judge your success by even the quickest of glances at a plate- how many colours? I even read an article a few years ago that suggested we need to eat 31 different plants a day- I tried that for a few days- it's really hard!
So I decided to give Breakfast Boost a crack. My pack suggests that I should have two tablespoons daily on cereal, toast (?), in salads, as a dessert topping, or mixed in fruit juice, yoghurt or protein drinks. I know that they're trying to get me to use lots of their product and that's fine, but I just don't find the on toast option appealing at all, and I really don't like gritty things in drinks, so I'm unlikely to do that. Happy to put stuff on my cereal though. 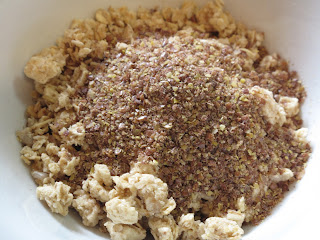 I found the two tablespoons a bit much, and so have been putting a tablespoon on my cereal each morning, and then topping it with fruits, including my beloved baked rhubarb, and whatever else I may have about the house. In the last few weeks I've been adding cinnamon and ginger too. There isn't a lot of taste truth be told, to me it seems to add more of a textural component to my bowl of cereal (but not in a bad way). 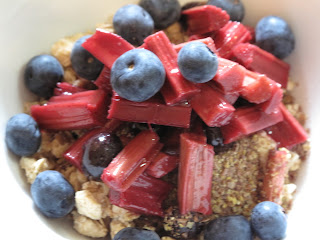 I've nearly eaten the whole packet now. I should perhaps try it in some other format, although I'm happy enough with it on my cereal. Have I noticed any particular change that could be attributable to my increased consumption of linseed? Well, no. Still, I feel that it's likely to be good for me, and I'll try more of the Lively Linseed products in the future- they do a Blueberry Breakfast Boost, and I've started to see their biscuits around too.
Posted by Louise at 22:59